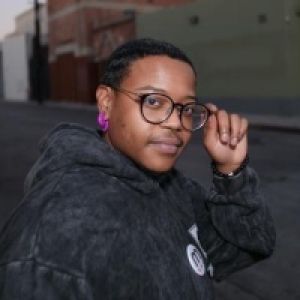 Born in a highly religious family to a single mother determined to give her children a different life, Sir always pushed back on every box he was being socialized to fit into. Learning the power of his voice and advocacy through art Sir was able to define himself and design himself to be the creator he is today. Sir Lex Kennedy is a vegan, queer, black trans masculine media content creator who loves film, music, gardening and the beach and believes “ball is life”. Lex studied Comparative Women’s Studies and Film at Spelman College in Atlanta, GA, before being forced to leave and finished his studies at the Los Angeles City College in their film program. As an artist and activist, Sir Lex strives to bring marginalized stories to the center of popular culture through comedy series and documentaries. Sir Lex has directed multiple short films featured in film festivals like,  Campus MovieFest, Newfest, Fusion and Outfest, through their inaugural OutSet program and across the world, winning numerous awards.  Sir Lex completed a Sound Fellowship this past Fall for DISCLOSURE, documentary which recently premiered at Sundance. Lex worked as a Producer for Tribune Creative West/KTLA5 in Los Angeles, CA. He is currently working for ABC7/Disney until his contract ends due to COVID-19. Over the summer of 2020 he Produced and Assistant Directed on the short, edible. He is currently producing the pilot to his series RETROS!