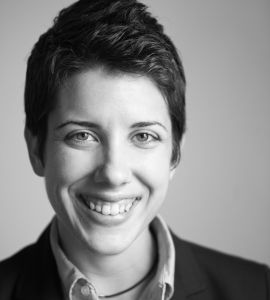 Elizabeth (Libby) Sharrow (they/she; M.P.P.; Ph.D. Political Science) is Associate Professor of Public Policy and History at the University of Massachusetts Amherst.  They specialize in the gendered politics of public policy and how policy has shaped intersectional meanings of sex, race, sexuality, disability, and class in U.S. politics over the past fifty years. Dr. Sharrow is published in multiple peer-reviewed and public forums on the politics of Title IX of the Education Amendments of 1972, LGBTQ+ politics, the politics of the family, gender and race in U.S. politics, and the politics of college athletics. She was recently awarded the 2021 Best Article Published in Politics, Groups, and Identities from the Western Political Science Association. They are co-Principal Investigator on the National Science Foundation ADVANCE-funded, $1million grant, “MeTooPoliSci: Leveraging a Professional Association to Address Sexual Harassment in Political Science.” For this work, she and her collaborators received the 2019 Jane Mansbridge Award from the Women’s Caucus for Political Science. Their scholarship is also funded by the Social Science Research Council, the American Association of University Women, the American Political Science Association, the Myra Sadker Foundation, and the National Collegiate Athletic Association, among other funders. She is currently working to complete two books on the history and consequences of Title IX, and several papers on the politics of trans sports participation.